This is the only single released to promote the brilliant Superwolf album. Three facts which suggest that it wasn’t much of a promotional move, however: (1) “I Gave You” is a great song but it’s not the album’s best; (2) it’s the last song on Side Two of the album; (3) the single was released after the album had already come out. A note here on Oldham’s voice. Firstly, his singing is improving in leaps and bounds around this stage of his career. The other thing is that his voice has taken on a parched, brittle emotive quality to it, stronger than ever, on this song and many of the others on Superwolf. This is a good thing. 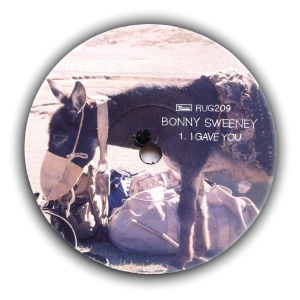 I Gave You… is a song sung to an ingrate.  Here we have Sweeney doing his finger plucking electric guitar arpeggios to provide a mercurial interpretation of Oldham’s lyrics. In the middle of the song, a thin but quite beautiful and sad organ line joins with the guitar. In the lyrics, the Bonnie-narrator lists all the things he tried to give someone, a partner presumably, except that she seems to have either rejected his gifts or treated them rather poorly. For example, “I gave you a child and you didn’t want it / That’s the most that I have to give.” He gave her a house which she failed to haunt and a tree which she failed to embrace, but what are we to make of this line: “I gave you a nightmare and you did not chase it”? Is that why she “must escape … this love that we once called friend”? So the poor fellow, singing awfully sadly, laments this tragic situation because now he has nothing: “Now I’m standing empty, helpless and bare / Without a morsel left of me to give.” And she’s gone and done a runner on him, “vanished into thin air,” the very same air “in which I must live.” What does it all mean though? Did he scare her off with his nightmare? Was he too freaky. I love this line: “I gave you a dream and you’d only wake from it / Now I’ll never go to sleep again.” It seems he never wants to risk dreaming again in case he has to relive this anguish. And you can hear it in that dry throaty vocal. The melody is yearning but tuneful, a slow dreamy sad faraway feel. The mix between arpeggio electric guitar and metallic organ line is perfect; anybody who’s ever suffered unrequited love can ride this song for the feeling. Unfortunately, for some reason this 7” single has been recorded way too loud. The sound quality is awful, often distorting on the guitar and even on Oldham’s voice in places. Could just be my copy.

Four Screams… is a very strange little song, still in the mode of Sweeney/Bonnie as per the Superwolf style, although the recording on Oldham’s voice sounds raw and live and hurt and like…vulnerable, like someone’s apologetic little brother. It opens with a light bell-like organ sound, and Sweeney’s delicate electric guitar, meandering around Oldham’s voice. And there’s some weird whispery harsh breathing sounds at the very start, and then again on the chorus. He sings of a girl with a face so beautiful it subjugates him, brings him under her dominion, “like the sun subjugates.” He serves her and loves her … and … we get descending screams in the chorus: “Scream, scream, scream” sung four times with Sweeney’s light backing on falsetto vocal. Okay, so then she goes away, especially when she’s innocent. Hang on, back up a minute…why all that screaming? Just before that he’d sung, in sad tones of resignation, “Loving you is like loving someone else,” which is an awfully cryptic line; it sort of displaces her, and suggests frustration on his part. So who’s screaming? Him or her? Her actions “destroy a sunny day,” (beautifully cracked voice here) and “rain keeps her down” so that “her power it cannot be.” Something very dark occurs between them as he seems worried that her power might “fester a super-demon mystery.” Uh-huh, and so twelve more of those screams, with that really weird metallic falsetto of Sweeney’s, and a programmed keyboard beep joins them, keeping time and fading just before the final verse. Anyway, she goes missing, but later gets found (I think) “shrinking in her kitchen” by the night pilots. “The night pilots by now have found her,” with both Oldham and Sweeney singing, and damn their voices sound great together. Then more of that freaky breathing/laughing sound (I can’t tell) before it fades out on organ. Good song, glad I got to hear it.

Apart from “I Gave You,” appearing on Superwolf neither song here appears anywhere else in the Oldham vinyl canon.

There was another 7″ released in 2005—Oldham recording with members of the Tindersticks doing a stunning cover of “Puff The Magic Dragon.”